MetalBard is a personal pet project of mine. I’ve gone to about a hundred different metal concerts of every stripe, often several in one week, and I always had to check multiple sources to figure out when a show was coming up, who was playing, and where. Since I was a teenager, spending a night out at a DC-area metal show was one of my most cathartic escapes and one of the few places I felt I belonged, so in a way MetalBard is my way of giving back to that community.

In the world of DMV (DC, Maryland, and Virginia) metal shows, one site reigns supreme: DC Heavy Metal. Other music scenes will use services like Songkick, but metal shows have a tendency to be very local and very DIY. DC Heavy Metal is the answer to that, run by a single, very hardworking member of the DC metal community, it’s the place to go to see which shows are coming up. So why would I want to encroach on that or attempt to copy it? Well, it's a simple blog and doesn’t have the best responsive design or mobile UX, and those are my areas of expertise. So let's take a look at the steps I took to make MetalBard an app that is perfectly tuned to the needs of its audience.

Seasons in the Abyss

The objective of MetalBard is to answer a few basic questions:

Again, a lot of music fans will take these questions in the opposite order, starting with wanting to see a band they like (i.e., “Oh, La Dispute is playing at Ottobar! Let’s get tickets and directions.”). Metal heads will go to a show just to see what's new and hang out, and hey, if it sounds awful there’s always a bar. 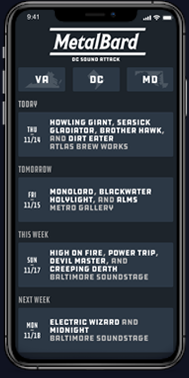 When is the next metal show in the area?

This is the part of the workflow that DC Heavy Metal nails. Upcoming shows are posted as they’re announced, displayed in order from soonest to latest, and removed promptly the day after the show. It has one issue: it’s updated manually each day so things can slip through the cracks and the updating process (it seems) is extremely cumbersome.  We’ve made the process of adding shows, bands, and venues much easier and more sustainable, but otherwise we can’t improve on perfection. 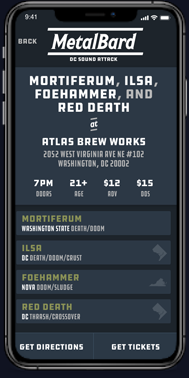 The next thing our metalhead needs to know is where the show will be taking place. The DMV area is pretty massive and there are a lot of music venues scattered all over, but they are concentrated in DC and Baltimore. The user can filter upcoming shows by state or city to make sure they’re not seeing results that are outside the area they would want to drive to. Once they have chosen a show to look into, they’ll be presented with all the important details: the venue’s address and a convenient Maps link. 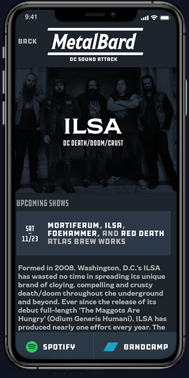 Who is playing? Who the hell is that?

Griefloss? Bleach Injection? Sorge? Who the hell are those bands? And what does Sorge sound like? They play psychedelic stoner doom swamp magick, of course, but you’d never know that from just the name if you weren’t familiar with the band.

Whether you’ve never heard of an obscure local opener or you’re staring at a list of band names that read like a page from a medical dictionary, MetalBard can help you. Tapping on the name of each band brings up a profile with their location, the metal subgenre they are a part of, and links to listen to their latest releases on Bandcamp and Spotify. Want to see if that band is playing another show in the area? Their upcoming shows are front and center.

We’ve got our workflow figured out but we still have some of our most important considerations to take into account: the user’s circumstances and surroundings. I found one of the places I spent the most time looking at upcoming shows or upcoming sets was in dark, dingy bar basements and back rooms. It was important to me to make that app usable and legible in a dark, loud room, possibly with a lot going on around you. And if it’s usable through a few layers of beer goggles that’s gravy. Big fonts, high contrasts, large tap areas, and considerations for the colorblind make sure that MetalBard is accessible by metalheads of all stripes.

Live music has molded my life since my teen years, and every metalhead should have every opportunity to see shows in their area. Perhaps one day MetalBard will expand into metal scenes the world over.